skip to main | skip to sidebar

From Bryan McKeon:
Celebrate Our 2nd Victory!
Bask in the glory ye gods,

February 2nd Saturday at 8pm.
Bitter End on Clement Street between 5th and 6th (south side).

Strike up another victory against the invasion of BIG BOX and Chain Stores in SF neighborhoods!
After a month and a half of organizing and advocacy, Richmond District residents have scored another victory against STARBUCKS which had again been trying to sneak into our inner Richmond neighborhood, this time with a proposed cofee kiosk in the newly rebuilt SAFEWAY Grocery Store on 7th Avenue at Cabrillo Street.
This afternoon we learned that Safeway, after hearing concerns from neighbors and small businesses in the area has backed down and will not seek a CONDITIONAL USE PERMIT from the SF Planning Department as required by our formula retail policy in the City [Prop H].

Earlier this month Bryan McKeon, David Tornheim, Jesse Fink and others had begun gathering signatures of support [again] for our small businesses and preserving the unique and diverse character of our Richmond District. We were successful over the summer in a similar campaign to keep STARBUCKS out of the Inner Richmond at a proposed site on Geary at 5th Avenue.
Safeway will be issuing a letter stating that they will not be seeking the conditional use permit for the STARBUCKS, but they will be using the kiosk that was set up for STARBUCKS for Safeway's own coffee.

Thank you so much to everyone who wrote, called, rallied and spoke out at the 9/11 Board of Supervisors meeting to stop the Starbucks in the Inner Richmond District.
The SF Examiner and SF Chronicle coverage didn't adequately acknowlege the tremendous groundswell of support we built from our Richmond District community and other neighboring communities to stop the STARBUCKS:

Starbucks' effort to flood San Francisco with coffee shops ground to a halt Tuesday when the Board of Supervisors blocked a new outlet in the Richmond District under chain store regulations passed by voters last fall.
The board voted 9-1 to overturn the Planning Commission's June approval of a Starbucks at the corner of Geary Boulevard and Fifth Avenue, killing the proposal.
Jesse Fink, who has owned a nearby cafe for 25 years, filed the appeal on behalf of the Clement Street Merchants Association, which represents approximately 30 merchants in the area.
"I don't want San Francisco to lose its character and become a city of strip malls. ... That's what Starbucks is all about," Fink said in a hearing before the board.

Kudos especially to organizer extraodinaire Bryan McKeon, Toy Boat's Jesse Fink and his family, and Meg Lynch of Velo Rogue Cafe and the many richmond district small business folks that supported and built this campaign from 2 people to over 4700 united voices in a few weeks. Thanks also to David Tornheim, Dean Preston - Local-Imact.org, Eric Brooks - Our-city.org, Kathryn Roberts, and planning commissioner Christina Olague and others that provided key strategic advice. And Sue Hestor and Steve Williams for their legal advice as well.
Most of us were worried going into the 9/11 hearing, but by the time the Supervisors were deliberating we knew we had won. My 7 year old daughter Jade joined in the celebration last night too, not only because she thought there might be free ice cream from Toy Boat. I told her 'this is what democracy looks like' - and it's better than ice cream.
Posted by Eric Mar at 1:57 AM No comments:

Bad maps, angry merchants and 5k worth of signatures

This blog is written by Bryan McKeon, of the original organizers of the neighborhood drive to halt the Starbucks going into 4041 Geary.

Well the plan is coming together and its quite overwhelming. More than a dozen COFFEE SHOPS from the Richmond district alone have submitted letters of opposition to City Hall Board of Supervisors . Many will be there to have their voice heard. Many of these coffee shops (and many other businesses also) have had petitions that are now totalling almost 5k. The exact number I wont know till the day we submit them (we have to go through and subtract the out of towners or incompleters etc, this is a small percentage but we have to verify what we submit).

I am both nervous and excited about this and really, more excited about how the neighborhood is coming together to decide how it is all shaped.

See you all Tuesday.
Posted by 4th&Geary at 1:31 PM No comments:

Help stop Starbucks in the Richmond -
click here to send an email letter to the SF Board of Supervisors now!
And tell your friends and neighbors - pack SF City Hall Tuesday 9/11 at 4:30pm for the hearing to decide on the issue. Or contact us is there are other ways you can help! [Thanks to www.local-impact.org for their support]
Posted by Eric Mar at 12:34 PM No comments:

Chinese People Kick STARBUCKS Out of the Forbidden City/The Richmond District Can Do It Too! But we need your help! 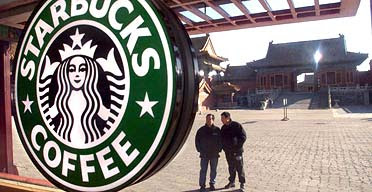 Photograph: Stephen Shaver/EPA
Last month, 500,000 people in China successfully kicked STARBUCKS out of the Forbidden City in Beijing. But STARBUCKS still operates some 200 outlets in China.
In the summer of 2003, the Hayes Valley Neighborhood Association also successfully kept STARBUCKs from moving into their community. The following year the late Tess Manalo-Ventresca and Sunset Neighbors in Action organized a successful grassroots campaign to keep STARBUCKS out of their neighborhood as well. Later that year, SF's Japantown activists successfully blocked a Starbucks they say would have harmed many of their small businesses as well.
We can do it too in the Richmond District - support our small businesses and protect the character of our neighborhood and keep Starbucks out. But we need your support.
Please go to http://local-impact.org/ to send emails and faxes to the San Francisco Board of Supervisors by September 11th. If the No Starbucks in the Richmond Action Alert is not posted on the site yet, it will soon be. So keep checking back.
Posted by Eric Mar at 10:40 PM 1 comment:

Supported by the Clement Street Merchants Association
and over 5000 residents of the Richmond District and throughout San Francisco.

Cafe Del Sol on California near 5th Ave (north side)

JavaBreak on Clement between 3rd and 4th

...and many other coffe houses and cafes in the Inner Richmond District.

If you have not signed the STOP STARBUCKS petition please do so at the following independently owned businesses in the Richmond and neighboring areas:
Toy Boat (5th and Clement)
JavaHolics (6th and Balboa)
Q restaurant (on Clement between 3rd and 4th)
Blue Danube Cafe (on Clement near 4th)
Green Apple Bookstore (the main store that is on Clement between 6th and 7th).
Cafe Velo Rouge (on Arguello at Mcallister)
Cafe du Sol on (Lake near 6th)
Cafe Muse (on 8th near Fulton)
Central Cafe (at Central and Hayes)
Balboa Theater (at 36th and Balboa)